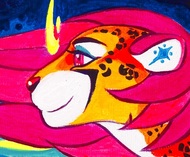 mcahogarth@mcahogarth
February 28, 2021
Questions You Have

This is my "if there's something you'd like me to talk about/post about/or audio-ramble about" or "if there's a question you want to ask" or "share comments/observations" post. Let me know what's on your mind. 🙂

mcahogarth@mcahogarth
February 28, 2022
No One Expects the Unscheduled Livestream!

The first 20ish pages of Sketchbook 88 (after I got organized and fixed some of the problems). Mostly Jokka, some jaguar pictures (including Harvest Moon).

So leave me art prompts!

Thanks for your comments yesterday on the business post... all very provocative, in a good way. I'll try to respond to all of them today.

Some Alysha misc now, since I'm gearing up for the results of the Kickstarter!

Petrov is giving away coupon codes for every book in the Alysha series (and has some leftover coupons for Marda and the business book). You can pick those up here (and please do! The books are bought already, someone should use them!) https://twitter.com/PetrovNeutrino/status/1457344535843987461

Our own @JudasComplex sent along a sample of the Faith in the Service audiobook, which I've attached for your delight! I... haven't had a chance to listen to it. Don't ask me about my past week and a half or so. Putting it here will guarantee I get to it.

After hearing the amused comments during the livestream, I went ahead and added all the ship type illustrations I have inked from the 90s to the wiki. Glory in the rampant adorableness of their anthropomorphic stylings! See those ...

mcahogarth@mcahogarth
April 12, 2021
The Jaguar's Heart 7: We Are Not a Monolith

A little comedy today, at least in the link. Transcript follows.

Hi, all. Welcome to this episode of The Jaguar’s Heart.

A while back I was introduced to a comedy sketch about Cuban coffee by a Mexican comedian, Gabriel Iglesias. ( The sketch begins with him greeting all his fellow Latinos and then backing up to say ‘but we’re all different, aren’t we’ which is a segue into a demonstration of how different Hispanics speak Spanish.

It is hilarious. First, because I am a Spanish speaker and a linguistics hobbyist, and his portrayal of various accents resonated with my experiences in trying to make sense of them myself… Not always easy, since from culture to culture, slang and accent are often totally different (and sometimes grammar! Spaniards use a grammatical construct that has died out in many other Spanish-speaking countries, the plural “you.”)

I also loved it because the Cuban coffee part is real. I grew up with Cubans. I know how we are....

One of the most common things I hear (and say) right now is "the asymmetry is the story." Here's one about how none of us are innocent of the sins we hate in others.

Hi, all. Welcome to this week’s episode of The Jaguar’s Heart.

It’s been weeks since the Baen’s Bar incident and I’m still thinking about it... because the longer I do, the more I feel, overwhelmingly, that it’s obvious that the problem is deeper than “this forum was saying stuff that offended us.” We have to back up to the glaring fact that people on opposite sides no longer consider each other human. Nothing I say will matter because the people disagreeing with me don’t think I’m human. They have denied my humanity; they have not bothered to listen to my beliefs, or have fake-listened to them in that way that people do when they’re so ready to prove you wrong that they’re only using your speech to provide talking points for their own ideas.

We have forgotten how to listen.

Increasingly, we have also ...

Come relax if you're around! Say hi, give me a prompt. :)

I did not tag all the times it was implied that her ears reddened not purpled.

I have a guess on how a whole world's atmosphere could be removed.
Because I thought that unlikely.
But if a slide was triggered on world, and led to space or to another planet, the atmosphere would/could go.
No one mentioned if there was wind from the time they opened that slide, said in some accounts to have opend on their old world when passing to their new.

Join other Jaguar fans and friends in this interactive community! You'll get news, musings, bits of what I'm working on, and some of my rambling about my beliefs and the ethics of art/writing in troubled times. You'll be able to share your thoughts with posts that the whole community can see, and we'll have live chats and it'll be fun!

The rules for my Livejournal and my Discord server apply here as well. You can read them at length at http://mcahogarth.org/the-jaguarholt-discord-server/, but they can be distilled to: "be civil, no profanity/NSFW stuff, and stay on topic."